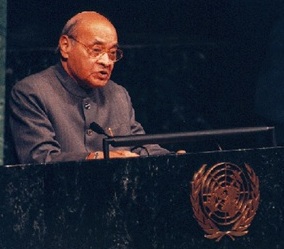 Late Shri P.V Narasimha rao is undoubtedly the Chanakya – the technitium leader for India  whose name is in resonation for an installation of his statue in the parliament.

We  INDIANS  have embraced the Daughters, Sons of  the OTHER SOIL than the TRUE SON OF THE SOIL.

Shri.P.V was an entity himself  who mustered India in to developmental cradle when the economical situation was foeticidal. In 1980`s when India was nearly bankrupt,he rose like Phoenix who saved us economic Pyre .

The Modern Never-Say –Die an enduring Vishwamitra  who by virtue of his  Rajadharma ,  great literary  great works  to his credit   served the nation..

As an AAM AADMI  he never let his family members  intervene in the PMO- Affairs ,a rare rigid stance that very few politicians can dare to take.

His simplicity & workholism  is a rarity  today where there is much of political  dogfights  .

As a perfectionist drafted Indian defence preparedness and as the lone charioteer who disembarked shunning FDI and let flexibility for FDI`S which the fruits  of which have ripened. opened foreign investment, reformed capital markets, deregulateddomesticbusiness, and reformed trade regime. Narasimha was successful in terminating the Punjab separatist movement and neutralizing the Kashmir separatist movement.

The MOUNA MUNI  was an introvert whose silence spoke more actions than words..The people  of India are indebted for his acumen to bringing the proficient in cabinet portfolio &He is the technicium  management GURU

During    preparations for so called nuclear testing Shri.PV is said to have mislead the USA  & distract it   and gain time for the preparation of  hydrogen bomb testing. He followed  that the Silence was  his biggest element and weapon, it distracts enemy  more than anything.

He only followed the RAJADHARMA during the Babri issue, wherein the Centre cannot do anything in view of the constitutional scheme of things and in the absence of a report from the governor there should be no interference  whatsoever  and  union  belief in the federal structure and function ,but much is maligned against him though the  Liberhann Commission acquits him of the charges and likewise the JMM case  too.

A Bharat Ratna  to Late Shri,P.V .Narasimha Rao is with due respect is respect to his multifacetism  through  which served the motherland in all fields.